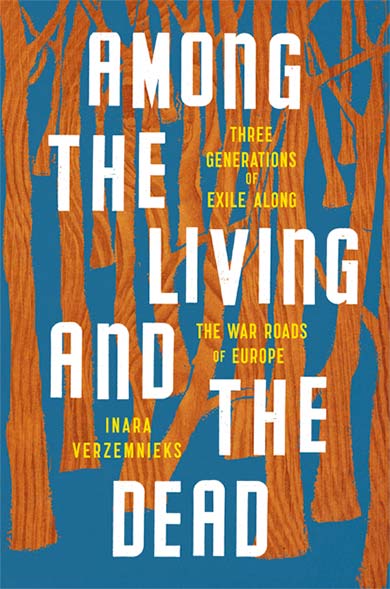 AMONG THE LIVING AND THE DEAD

“It’s long been assumed of this region, where my grandmother was born…that at some point each year the dead will come home,” Inara Verzemnieks writes in this heartrending story of war, exile, and reconnection.

Raised by her grandparents in Washington State, Inara grew up among expatriates, scattering smuggled Latvian sand over the coffins of the dead, singing folk songs about a land she had never visited. Most of all, she listened to her grandmother’s stories—stories which recalled one true home: the family farm left behind in Latvia during the Second World War. There, her grandmother Livija and her great-aunt, Ausma, were separated. Livija fled the fighting to become a refugee; Ausma was exiled to Siberia under Stalin: the sisters would not see each other again for more than fifty years.

One day, in a box of her grandmother’s belongings, Inara discovers the scarf Livija wore when she left home. This tangible remnant of the past points the way back to the remote village where her family broke apart. In Latvia, Inara comes to know Ausma, her family, their land and its stories, and there pieces together Livija’s survival through years as a refugee. Weaving together these two parts of the family story in spellbinding, lyrical prose, Verzemnieks gives us a cathartic account of love, loss, and survival.

“It is impossible to read her book without drawing present-day analogies…In this context Verzemnieks’s intimate and poetic book assumes practical value…Verzemnieks is solid on her history. Even more, she offers a model for how to navigate it.”
—David Bezmozgis, The New York Times Book Review

“For many Americans, some wars — though long ago and far away — endure, affecting their daily lives. Inara Verzemnieks’s searing memoir, Among the Living and the Dead, shows how.”
-Robin Shulman, The Washington Post

“Spellbinding and poetic, this is a moving tribute to the enduring promise of home.”
–Booklist

“With narratives as dreamy and nightmarish as a living Grimms’ fairy tale…”
-Rebekah Denn, The Christian Science Monitor

“Verzemnieks is poetic, lacing one image over the other until the whole thing astounds, illuminating the past and present in wondrous ways.”
-Angela Ajeyi, Minneapolis Star Tribune

“Verzemnieks is an exquisite writer who weaves together tales of old Latvia and her own discoveries in lyrical prose.”
-Anne Bartlett, BookPage

“Verzemnieks does not shirk from confronting the extremities of human behavior; but she also gives us the rich textures of a world in which poetic mythology coexists with sophisticated modernity, the dead mingle with the living, and the hardships of a traumatic past are countered by the strength of memory and of lasting attachments.”
– Eva Hoffman, author of Exit Into History

“The astute reportorial sensitivity of a master Eastern European historian like Timothy Snyder, as filtered through the lyric sensibility of a García Márquez, and suffused in the aching nostalgia of a latter-day Proust.”
– Lawrence Wechsler, author of The Passion of Poland

“Poetic, melancholy, colored by the dark beauty of the northern landscape, this memoir of loss and recovery from the tragedies of the twentieth century will linger in your imagination, widen your historical perspective, and make you grateful that language has such power.”
– D. J. Waldie, author of Holy Land: A Suburban Memoir

“An exquisite book for the ages as it unfolds from its first mysterious sentence into a masterpiece about war, survival, memory, and, most movingly of all, human need.”
– David Finkel, Pulitzer Prize winner and author of The Good Soldiers